The Ford F150’s 3.5 EcoBoost is a fantastic engine. This turbocharged six-cylinder gas engine can compete with any V8 engine and has the easy handling of modern engines. You can argue that it doesn’t score that well in the sound department when compared to a V8. But in reality, the V6 engine has a nice tone and paired with a solid exhaust, it can hit the spot for many enthusiasts’ needs. That’s why you should pair the Ford F150 3.5 EcoBoost with a nice exhaust. But how do you pick the exhaust? Don’t worry – in this list, we’ve included popular and fan-favorite units to help you zero in on the best exhaust for 3.5 F-150 EcoBoost. 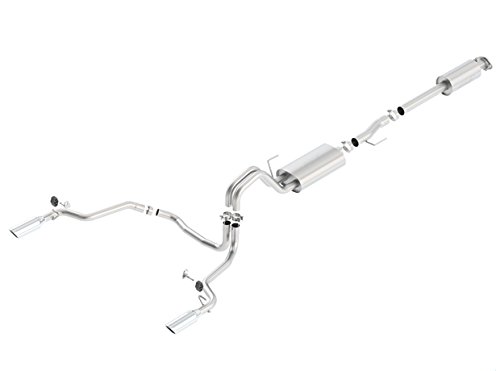 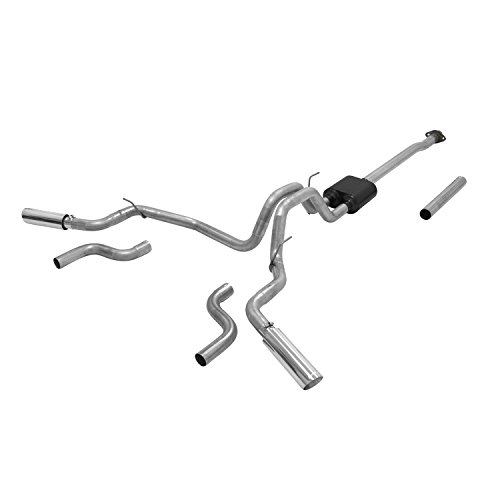 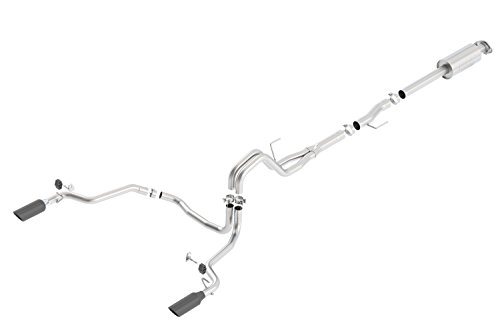 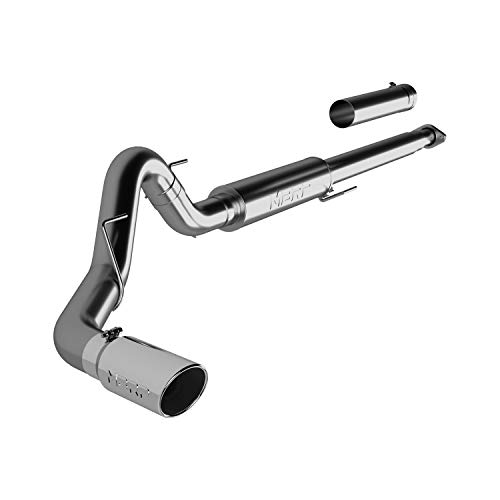 It’s difficult to ignore the loud nature of most aftermarket exhausts, especially if you’re not the one driving the truck. Or if you do a lot of highway miles, the droning of most loud exhausts can become annoying during a long drive. What you’re looking for is an exhaust that doesn’t sound as muted as the stock unit, but at the same time, it doesn’t make your ears bleed. Say hello to the Borla Touring Cat-Back exhaust. It’s got a gradual sound, which means its noise picks up as you rev more. Also, it’s not intrusive, so the in-cabin noise is limited, while it has moderate noise on the outside.

Like other Borla products, the Touring exhaust is also made of high-quality T-304 stainless steel. The exhaust is mandrel-bent and made using a high-precision CNC machine, which means it’s tailor-made for the 2015 – 2020 Ford F150 with 3.5 EcoBoost. Borla mentions the F150 trucks compatible with this system include extended cab – standard bed, and crew cab – short bed. If you want to use the exhaust on a crew cab – standard bed, you’ll need an adaptor.

It has a 3-inch tubing in the muffler, with dual 2.25-inch outs, 4-inch tips on each end, and a single split rear exit. It doesn’t just fit perfectly but it also adds to the overall performance and efficiency gains — especially if you’ve got other upgrades installed already.

For its intermediate sound and solid build quality, the Borla Touring gets our vote. It’s backed by a million-mile warranty, but drop the seller a message if you require any clarification on the compatibility or the warranty. (There’s no information about warranty in the listing.) So if you’re after an aftermarket exhaust that lets you enjoy the sound but without causing too much trouble to your occupants or even the neighbors, the Borla Touring is probably the best choice.

Now, if you want an aggressive sound on the outside and don’t mind some noise on the inside, Flowmaster offers the American Thunder series. It’s a cat-back system, so you’re unlikely to face issues while installing it, and with its high-quality build, you won’t feel short-changed either. But before looking at its other aspects, let’s talk about compatibility. According to the brand, the exhaust system is made for the Ford F150 trucks available with various engines. For our application (3.5 F150 EcoBoost), the model years 2015 – 2020 are compatible.

Both side and rear exit choices available

The exhaust system is made of 3-inch mandrel-bent stainless steel tubes, which eventually are connected to the 2.5-inch tailpipes. The exhaust tips are also made of stainless steel and are 3.5-inch in diameter. Both side and rear exit options are available, and you can pick where you want the exhaust pipes to be positioned, on the rear under the bumper or the side behind the rear tires. It uses the factory hanger location and comes with all the necessary hardware included. Flowmaster mentions that you can do it yourself at home.

For a system that’s much louder than stock but doesn’t cause too much noise in the cabin, the Flowmaster American Thunder seems like a great choice. It’s not the cheapest out there, but know that you’ve invested in a good-quality product. It’s backed by a limited lifetime warranty, so your ownership is bound to be happy as well. Check with the seller about the aforementioned warranty (as Amazon has no information on that) and the compatibility as well.

It’s bound to fit all models (2WD and 4WD) with all wheelbases, but standard cab/short bed versions and the Raptor model aren’t compatible. Users have mentioned that the exhaust sounds good (loud but not the loudest out there) although some droning is present. Another positive feature is that it doesn’t affect emissions.

Made for both the V6 and V8 engined Ford F150 trucks, the Roush exhaust is said to offer a throaty noise on the outside but without troubling the occupants — it’s said to eliminate the in-cabin droning. The increase in airflow and the reduction in back-pressure enables the truck to be more responsive and deliver increased horsepower and torque (Roush doesn’t offer any figures, though). The muffler and pipes are made of 409 mandrel-bent stainless steel (3-inch), whereas the dual exhaust tips are made of 304 stainless steel.

The Roush exhaust is made to work on all configurations for the 2011 – 2014 3.5 F150 EcoBoost. The factory hanger locations can be used, so no modification is required for standard models so the installation is claimed to be quick and easy. However, Roush maintains that for some models, you’ll need to do minor modifications. This is a rear-exit model by Roush, adding to the muscular styling of the Ford F150.

The Roush F150 is backed by a 3-year warranty, which ensures some added peace of mind. Check with the seller about compatibility and other warranty details, before making the purchase. Installation is easy. Some users have mentioned that it can get a bit loud (even from the inside), so you might need to consider getting a resonator to further mute the droning. The dual-tip end looks good as well, which might make you swing this way if you’re after a good-looking exhaust.

For your great Ford F150 3.5 EcoBoost, you probably don’t want to fit a part that’s not of the highest quality. That’s where the Borla ATAK Cat-Back Exhaust for 3.5 F150 EcoBoost comes into the picture. It’s nearly twice as expensive as some of the popular choices but you can see why in the way it’s made. For instance, instead of using a mix of different types of steel, Borla uses T-304 stainless steel, ensuring consistent quality. The mandrel bends and precision CNC manufacturing make the exhaust fit the truck like a glove.

It has 3-inch piping in the system with 2.25-inch dual out pipes. The tips are 4-inch in diameter and are finished in black chrome, making the exhaust look as much at home on a Ford Mustang as it does on an F150. This model has a single-split-rear exit. It’s compatible with 2015 – 2020 Ford F150 trucks with the 3.5L Ecoboost engine. The models are compatible in a variety of configurations — 2WD and 4WD, extended cab – standard bed, crew cab – short bed, etc. Borla mentions that if you want to install this on a crew cab – standard bed model, then you’ll need to add an adaptor.

The Borla exhaust system is backed by a million-mile warranty, whereas its black coatings, tip finishes, and carbon fiber parts (if any) are covered for a year. Drop the seller a message about compatibility (if you have any doubts) and warranty, before making the purchase. Users have loved the way it sounds (good sound on the outside, especially on the move, but devoid of droning) and the overall quality of the system. The installation is reported to be easy, and the truck seems a bit more responsive as well. Is it worth the extra cost? You bet!

If you’re looking for an inexpensive alternative to popular aftermarket exhausts, the MBRP unit makes a lot of sense. You can choose between models that are made of either aluminized steel, T-304 steel, or T-409 steel. And depending on the model you choose, the price varies accordingly, with the T-304 being the most expensive among these. There’s also a ‘Black Coated’ model which is the priciest that MBRP offers from this range of exhausts. Keeping value as our top-most priority, we’ve chosen the 16-gauge Aluminized Steel version.

It’s said to offer an aggressive exhaust note, but at a low cost. The exhaust system is easy to install — it’s a bolt-on unit that utilizes factory hangers. With all the required hardware included in the package, the installation takes only about two hours. It’s a single exit exhaust, has welded hangers, and comes with a 4-inch tip as well. It’s compatible with Ford F150 3.5 EcoBoost trucks made in the model years 2015 – 2020. Keep in mind that the compatibility list doesn’t include the 2019 F150 Limited model.

Backing the MBRP exhaust system is a 3-year warranty. You should drop the seller a message if you’ve doubts about its compatibility or need to ask further questions about the warranty. Its major advantage is its low price, but that’s not to say the exhaust doesn’t sound good. Some users have suggested getting a resonator to reduce the droning but most users are happy with the way it sounds.

The best exhaust for 3.5 F150 EcoBoost is the one you’d have no problems within the long run, the one you’d appreciate every time you drive, and ideally the one your passengers won’t hate because of droning. If that’s what you’re looking for, then the Borla Touring a great choice. The intermediate sound is backed by a good-quality product and a lack of droning. Move upward in the Borla line up and you have the ATAK. It sounds more aggressive, but has good quality and won’t bother as much with droning as some other loud ones. The Roush exhaust isn’t a bad choice, but it’s not completely drone-free. For aggressive noise, it’s hard to go wrong with the Flowmaster American Thunder exhaust. It’s not the cheapest, but it’s good quality, and it sounds really good as well. But if you want a decent-sounding exhaust without paying too much, the MBRP exhaust is a good choice.