Here at mechanicguides.com we’re eagerly awaiting the launch of the Tesla Cybertruck so we can get our hands on one and see if we can properly stress test it against the other titans in the Pickup Truck world. Anyone who watched the Cybertruck launch show, with Elon Musk will recall two things: The bold design of the Cybertruck and the epic ‘bulletproof’ window smash fail. Those with their eyes more focused on the spec though, rather than the spectacle, will recall the famous video where Tesla showcased the sheer towing power of the Cybertruck by putting it Head to Head, in a battle of the tows with a Ford F150. Some dispute whether the test was fair and break down the engineering loopholes behind the test but right now that’s not one for us to weigh in on. We’re more interested in independent testing, so ahead of us getting our hands on one we’ve put the Tesla Cybertruck and Ford F150 (2020 SuperCrew F-150 with a 6.5-foot bed) head to head with their specs. Let us know what you think!
Click to enlarge the image. 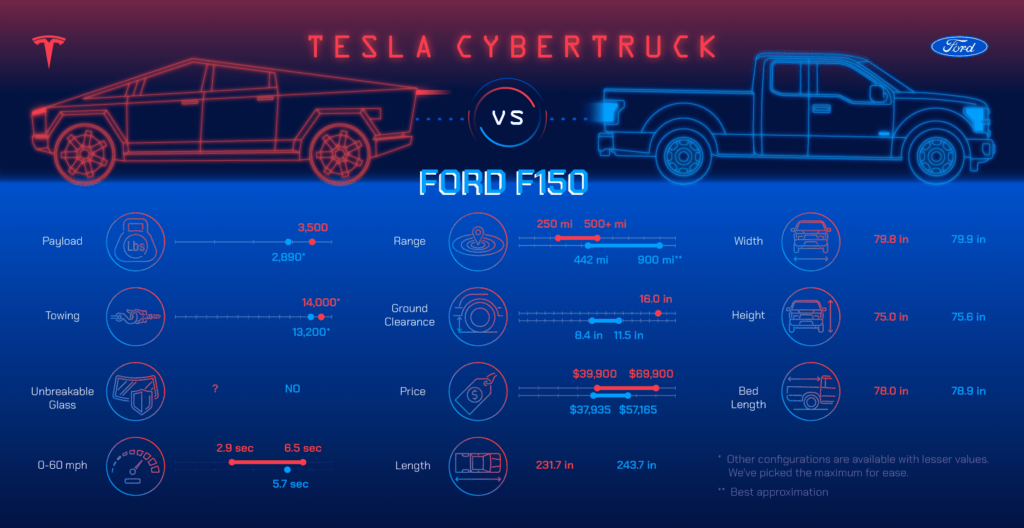