Complete Guide to Side by Side Off-Road Vehicles 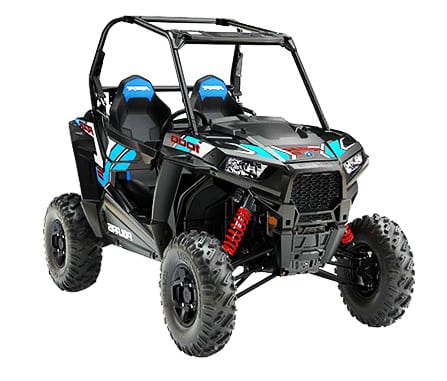 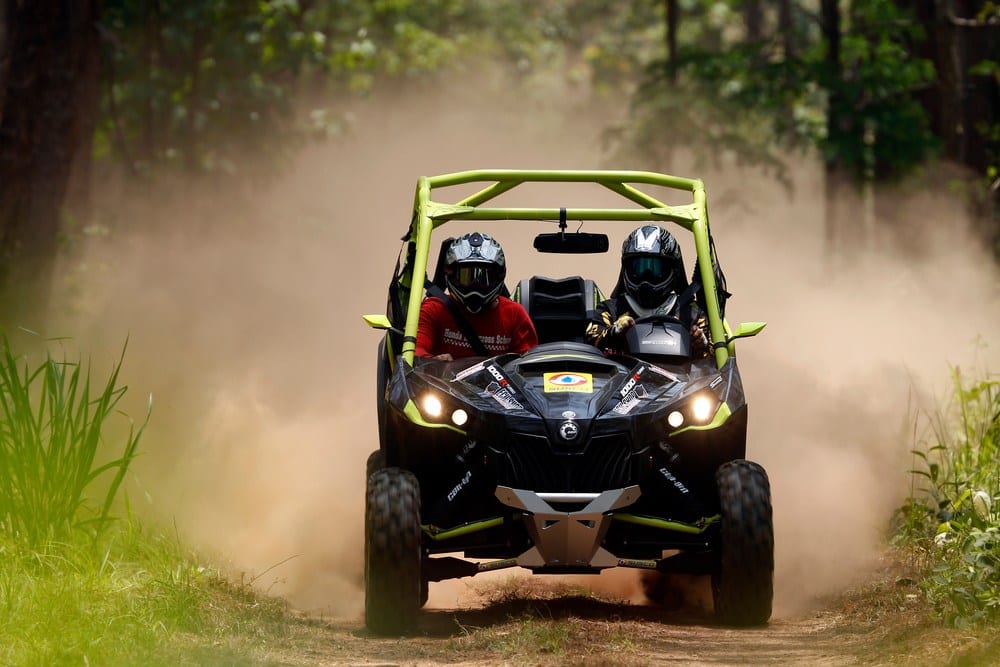 According to Wikipedia, SxS or Side by Side is a modern, off-road vehicle that is open, motorized and small. It is designed for the special, off-road use. It is commonly called a UTV that means utility task vehicle or, typically, utility terrain vehicle.

The vehicle is widely known as ROV or MOHUV that is recreational or multipurpose utility off-highway vehicle. It commonly operates between 25-50 miles per hour and definitely has:

According to Ontario Highways Traffic Regulations, a MOHUV device is to have:

Wisconsin law also states that a UTV is to be no wider than 65 inches, weight 900-2,000 pounds, coming with a steering wheel, a taillight, 2 headlights, and a brake light. The vehicle is not suitable to be operated on paved surfaces or used on the pavement because the tires wear quickly.

It is not approved for use on highways, public, paved streets, and roads, as it doesn’t meet the necessary specifications. The vehicle is commercially designed, manufactured and able to accommodate 2-6 people that is it has 2-6 seats. However, its side-by-side name means that 2 people sit in the vehicle cab next to each other, or alongside. 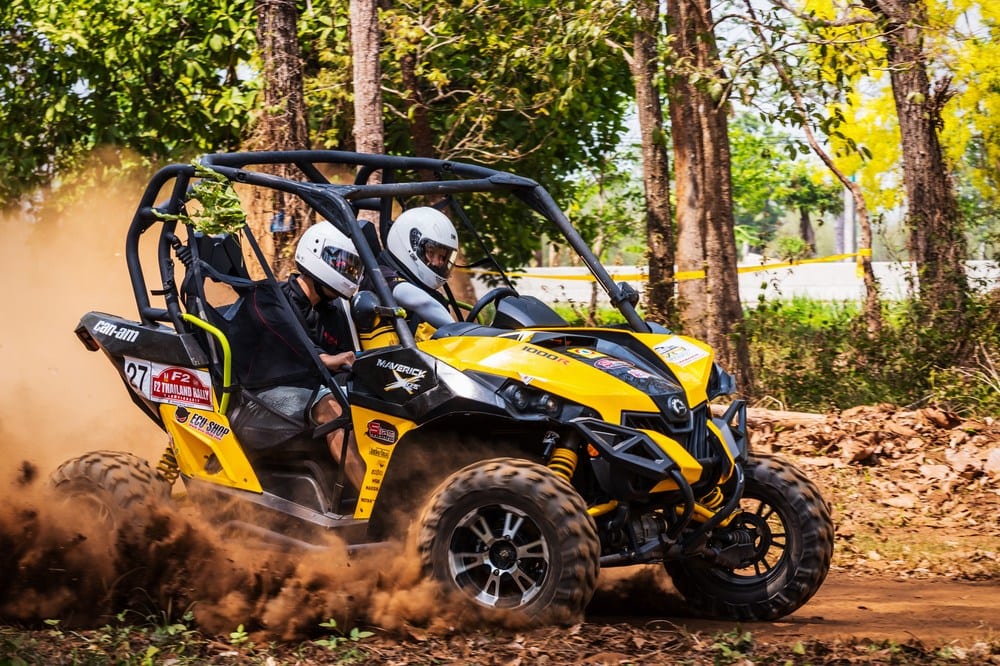 What Makes UTV Stand Out from the Other Vehicles?

UTVs are commonly compared with ATVs that are all-terrain vehicles. UTVs are typically larger, wider and much more expansive than ATVs. They also have much higher load and hauling capability, a lot of room for a pet. The UTV vehicles are more comfortable and safe for several passengers. However, they are not as maneuverable, speedy and powerful as ATVs.

UTVs is also compared with buggies designed for sports and racing applications. The vehicles that are called “buggies” come with powerful motors, transmissions, designed for fast acceleration, rear-wheel drive, the suspension that is suitable for ramp drives. An SSV vehicle commonly comes with a universal suspension that is good for hard and soft roads, motor of an average power, very high transmission capability.

Benefits and Applications of SxS Vehicles

Thus, a UTV vehicle is suitable for agricultural, farming and recreational use. Its basic benefits are:

The vehicle is still very affordable. It costs about $15,000 – $25,000. The price depends on the brand, shape, size, fuel and towing capacity. Engine type, horsepower and displacement are basic characteristics. Pre-owned UTVs are much cheaper. Meanwhile, the vehicles are successfully used, being irreplaceable for:

Gas-powered and electric UTVs are widely used as golf carts, for commercial and personal practices. Some modern models are easily made street legal. They just require some modifications. Multiple useful accessories are available on the market. So, UTVs may be allowed on roadways.

Actually, the modern outdoor vehicles weren’t really invented as a revolutionary new transport facility. It evolved from several types of vehicles that were already popular before. UTVs appeared under the precursor vehicles’ influence that inspired the modern UTV.

The cars that anteceded SxS vehicles and predetermined their design and performance are:

The first Jeep was produced in 1941. This off-road, 4-wheeled vehicle was initially designed for military applications. However, in 1945 the cars became available to consumers.

Being rebuilt for utility, off-road use in the 1950s, they shortly gained popularity. At once after they were redesigned to their civilian-type appearance, they were appreciated by customers due to their pragmatic design and versatility.

In the 1950s, dune buggies were built. These vehicles were designed for beaches, being the most suitable for recreation applications. Later, in the 1960s, the Meyers Manx version was introduced. It was initially made of fiberglass and designed for desert races.

The buggies were commonly smaller by size than other vehicles, but still capable of off-road, long-distance trips. Thus, it’s a great advantage of buggies and UTVs, so the vehicles and the motorsport are quite popular nowadays. 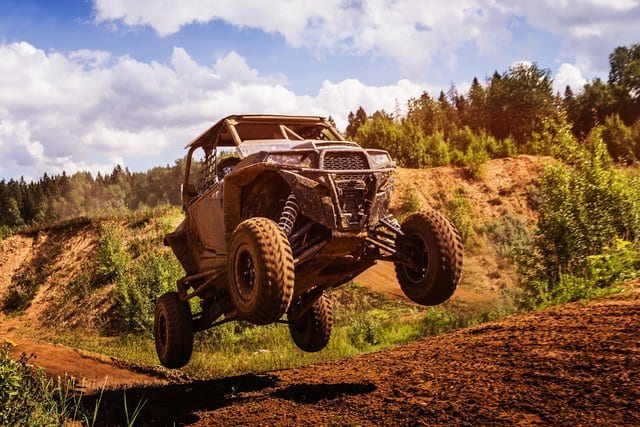 All-terrain vehicles that came with 4-6 wheels and easily traversed open water areas were introduced in the 1960s. They were called amphibious ATV and were widely marketed as the vehicles designed for recreational and utility applications. However, the models like Amphicat or Jiger were extremely popular only during a couple of decades.

Nowadays, they are often categorized as UTVs due to multiple similarities.

An ATV vehicle, such as Honda ATC90, that was released in the 1970s is another one precursor of UTVs. It evolved from three-wheelers and enjoyed great success. Therefore, some other models were produced in the 1980s. Honda ATC200E was a real landmark in off-road vehicles building. It included true suspension and racks. Therefore, farmers started using ATVs instead of tractors for some specific agricultural tasks.

Meanwhile, sport utility models like quads became popular in the 1980s. The Suzuki LT125 QuadRunner introduced in 1982 was the first 4-wheeled ATV vehicle.

Thus, since the late 1980s, the UTV that we know now was introduced. It started with the brilliant advent of the lightweight utility model Kawasaki MULE. It was versatile and useful for several applications that are ground management, building or farming.

The other unusual models that gathered attention, were Yamaha Rhino (introduced in 2004) and Polaris RZR. The first model was marketed as a utility and recreation vehicle; the second model is initially designed for recreational riding and off-road fun.

Therefore, UTV hybrid vehicles are incredibly popular nowadays. Apparently, medical purpose and industrial vehicles in the market. Green, electric specialty and single-seating models such as Polaris Sportsman Ace also have priority of existence. The UTVs protection and visibility is likely to be improved. So, let’s anticipate the next generation UTVs announcements. 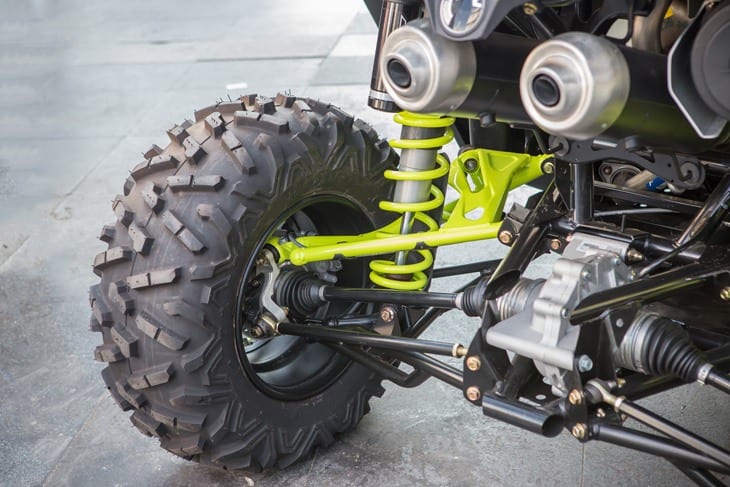 How to Operate and Maintain SxS vehicles in Safe Manner

Children that are younger than 16 are not allowed to operate a modern UTV. Additionally, avoid riding after taking drugs or alcohol, carrying more passengers than it’s recommended by the manufacturers.

Find a good, reliable mechanic, a reputable store to buy parts and inspect the vehicle before every ride. Check the breaks and the bolts that are properly tightened. Drive safe and enjoy your off-road riding!