Ford’s Bronco Adds Flavor to the US Truck/SUV Market 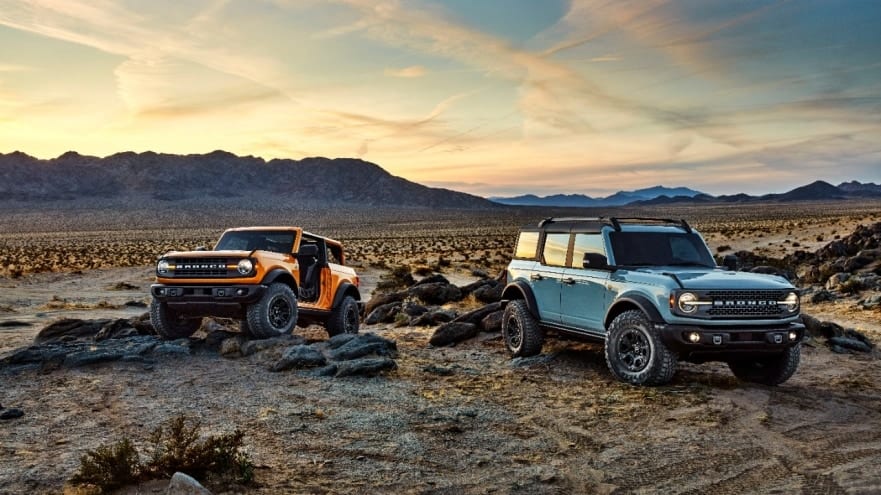 Short chassis, stubby design, and the relentless ability to carve its path are a few of the things an ideal SUV should have. And if you’re a fan of the form (and function) of such vehicles, you’ll be glad to know that there’s been a recent influx into the US market. It started with the Land Rover Defender, which might have an old name but is an all-new product ready to take on the more conventional trucks and SUVs. That was followed by a smaller outfit called Twisted. Twisted, which is also from across the Atlantic, takes old Defenders and makes them ready for the modern world — complete with a Chevy V8. But the biggest appearance in the segment is of a model whose predecessor ruled the hearts and America’s driveways. And its absence in the last few decades did nothing to diminish its popularity. It’s called the Ford Bronco. And as you’ve probably read by now, it’s coming back.

There will be two model lines for the Bronco: a standard, more off-road-ready Bronco, and a less-extreme version called the Bronco Sport. Keeping this story more relevant to the topic at hand, we’re discussing the Bronco at the moment. According to Ford, the Bronco embodies the toughness of the F-150 and the performance spirit of the Mustang. That is saying a lot, considering those two are fairly tall benchmarks. Production of the all-new Ford Bronco begins early next year and the first models are scheduled to reach the Ford dealerships by spring 2020. There are two body styles: two-door and four-door; and you’ll be hard-pressed to ignore either because they look good. To further the good looks and functionality, you can opt from the 200 dealer-installable accessories. Other customization choices include 11 color choices, four content packages, making a total of seven unique Bronco series, namely base, First Edition, Big Bend, Black Diamond, Outer Banks, Wildtrak, and Badlands. Prices start at $29,995 making the Bronco about $20,000 cheaper than the Defender 110 — although keep in mind these two hardly belong to the same segment, even if they follow the same ideology.

The style, spec and sparkle

The Bronco’s exterior is possibly in the same league as the mechanicals. And as relevant here since we’re talking about a brand name that Ford’s brought back after more than two decades. The original Bronco was introduced in 1965 and through various generations and designs carried on till 1996. Through the Bronco Concept, Ford hinted at the return. That was sixteen years ago. So clearly a lot has changed in our design sense — and Ford’s as well. But Ford has ensured that the design of the new Bronco encapsulates what the SUV/off-roader originally stood for, without having to unnecessarily introduce a legion of throwback design cues.

What you do get with the Bronco is a well-styled exterior that offers the ability to remove the roof in its entirety, the doors, and even the rear quarter windows. If that’s not all, the four-door model has enough space to carry its detached doors within itself. And while the two-door model lacks some of such capabilities due to a smaller size, you can option the four-door model with both soft and hardtop. If you remove the sportbar behind the second row (in both the models), you get an obstruction-free view of the sky above. Who needs a sunroof!

But it’s not just for star-gazing, the Ford Bronco. You’ll actually want to drive the whole day on unconquerable terrain to reach the ideal spot, won’t you! And the new Bronco seems to be made to do exactly that. It’s got a 4×4 system (duh!), 35-inch off-road tires, short overhangs (that translates to a 29-degree breakover angle and 37.2-degree departure angle), a ground clearance of 11.6 inches, Dana solid rear axle, and even seven driver-selectable modes (which vary the power delivery and gearing to match the conditions). Of course, that’s not it. You also get an undercarriage steel shield, modular steel bumpers with integrated winch mount, an optional advanced 4WD system, a high-strength steel chassis, key driver assists like Trail Control and Train Turn Assist that make traversing challenging paths easy, and a suspension setup second to none. This includes Bilstein dampers that have a long travel and position sensitivity. The rear has a solid axle with coil springs while the front gets an independent suspension.

All of that is backed by an equally potent range of engines: a 2.3-liter EcoBoost and the optional 2.7-liter EcoBoost V6. The former comes with a standard seven-gear stick shift (six forward gears plus one crawler gear) and an optional (standard on the 2.7) 10-speed automatic. The 2.3 EcoBoost is expected to make 270 hp and 310 lb.ft., whereas the 2.7 V6 comes with a projected max output of 310 hp and 400 lb.ft.

And despite all of this, Ford hasn’t forgotten about the paraphernalia in the kit. The interior itself is design to replicate the fun nature of the exterior. But you get a nice touchscreen infotainment system that offers you a 360-degree with ‘spotter view’ for tackling tight off-road situations without having to get out of the vehicle at every instance. Another great inclusion is of the rubberized floor on certain models. While you might not be able to hose it down, cleaning the Bronco after serious off-roading will not be an issue. The dashboard-mounted switches are also covered by silicone/rubber. The onboard infotainment system goes a step further in enabling you to enjoy off-roading by including more than 1000 trail maps onboard. What else will take you to get out and drive in hopefully a COVID-free world!

As you can tell, the Bronco is pretty much spot-on with what it offers on paper. The final specs and other details will be announced closer to the launch, although you can register and reserve one now itself. Ford has clearly made a vehicle that’s going to be enjoyed by many off-roaders, new and experienced. They haven’t skimped on features, and by the looks of it, the Bronco is a winner. But it’s certainly not the only winner here.

Some may argue that the upcoming Grenadier also deserves a mention but that vehicle is still far from being realized. The Jeep Wrangler Rubicon V8 Concept, on the other hand, looks a fair bit closer to completion. It’s powered by a 6.4-liter V8 engine that makes 450 hp and 450 lb-ft. Since it’s bound to be pricier than others here, don’t be surprised to hear that it’s possibly got the dream spec. A 2-inch lift kit, electric front & rear axle lockers, 37-inch MT tires, Dana 44 axles, and a 0-60 mph time of under 5 seconds. While it’s larger than the Bronco, it also shows its dominance in size: 13.25 inches of ground clearance, an approach angle of 51.6 degrees, a departure angle of 40.1 degrees, breakover angle of 29.5 degrees, etc. Other bits include a raised hood, custom half doors, and removable side panels and a powertop.

Spoilt for choice now, aren’t we!